"Frauscher always gave me the confidence to take on new challenges” 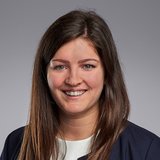 In our new series, we look at strong women who have had a crucial impact on Frauscher's corporate development in recent years. In the first part, we introduce Melanie Gangl, Managing Director at Frauscher UK. She gives us an exciting insight into her career including sharing valuable tips for aspiring female managers.

Melanie, you have been working at Frauscher for almost 11 years. Why do you still enjoy your work?

That's a very simple answer. Frauscher always gave me the confidence to take on new challenges. When I wanted to change and learn something new, my superiors supported and encouraged me. They would always say: "You can do it, you'll be fine". This support spurs me on and gives me the feeling that I am in the right company. That is one of the reasons why I am still here.

Another reason is, the opportunity to gain experience at our numerous international locations. I've always wanted to go abroad and I'm glad that Frauscher has given me this opportunity and supported me in my endeavours. When the company gives you this opportunity, it makes the whole process of going abroad easier. I believe that working in other cultures and countries makes my job that little bit more interesting and exciting. For me, these two factors are the most important - and Frauscher was able to fulfil both of them. That is the reason why I am still with Frauscher.

You first did an internship at Frauscher and then gradually worked your way up. What attracted you to Frauscher?

I was always excited by new challenges and especially when someone said, "That's not possible! Such statements motivated me! An example that I can still remember very well during my first years was when I started optimising the throughput time in production more precisely in sensor production. A colleague at the time said to me: "It won't work anyway!" That spurred me on to show that it very well could...and it worked.

Another factor that attracted me to Frauscher was the progressive internationalisation and the new tasks that came with it. I can still remember very well when we founded the location in India and I was allowed to organise the training for the first Indian colleagues in Austria. This was a great new topic for me. I was proud to be involved in this new project.

Did you plan your career as it has developed?

Who plans their career so precisely at a young age? I didn't do so and I think that's a good thing. If you always plan everything in detail, you can sometimes get lost or not be so satisfied. But even though I didn't plan my career, all my positions fit into the big picture that I want to achieve someday. I believe that you should always have a vision, a guiding idea in your head of where you want to be "someday". I've had this vision since I've been at Frauscher - and somehow the big picture is coming together.

For me, making a career doesn't mean getting a certain position. From my point of view, a career is a path to the goal and all the issues you pick up and learn from along the way. Of course, I didn't end up where I am today by chance, even if "by chance" that one person is needed or wanted for that one position right now. You have to do your homework and go the extra mile more often and show interest.

From my point of view, it is also very important not to keep your head down when you are offered a new challenge, but to say yes and dare to do it (my tip to women - dare and don't tell yourself you can't do it!). That was my attitude when I was asked to take on Indian production. It meant that as a 30-year-old woman I had to build up and lead a team with more than 20 male colleagues - in a different culture, to boot. Four years later, when I was asked to take over Frauscher UK, I was in a similar situation. It was a time when mainly older, more experienced colleagues were managing locations at Frauscher.

This also requires courage and self-confidence. How have you been able to assert yourself in an industry that is still dominated by men? Are there still prejudices?

It was never a big issue for me. I also never felt uncomfortable. Nevertheless, even in my early days at Frauscher, I wanted to prove to myself that I could make a difference as a woman in production. I did a lot of optimisation projects there. A big advantage was that my boss at that time, Gerald Buchinger, always stood behind me and supported me. In my early days, it helped me a lot to tackle things myself and, especially in production, to help with the optimisation projects, e.g. with reconstruction measures. Sometimes I still joke with Gerald today about the idea of sticking on the "parking spaces for production trolleys" in production myself, starting on the floor.

I never had the feeling that I had to assert myself as a woman at Frauscher. And I always think women have the advantage of being women, whether it's in the way they influence and lead communication in mixed or male-dominated meetings and how they understand teams. They stand out because in most meetings it's a 20/80 split - 20 per cent women to 80 per cent men. I think being a woman in a male-dominated industry can only have advantages, provided you use them and use them properly.

What role does the corporate culture at Frauscher play in this context?

The corporate culture plays an important role in general and is definitely one of the reasons why I am still at Frauscher. What surprised me very positively right from the start was to be with colleagues on first-name-terms (in German it is called “duzen"). To be on a first name basis ensures communication at eye level - right up to our CEO. I also notice that this strengthens the sense of community, motivation and innovation. In the very first year, I noticed that Frauscher is like a big family that is growing stronger and stronger. That was a very positive aspect for me and helped me to feel at home here.

Joining as Managing Director last year has developed a little differently than I thought. I already knew the team a bit, but I basically took over when the whole world went into lockdown. Hard to believe, but true: Until today, in my position as Managing Director I have never met my entire team in person on-site, but only virtually.

My daily routine as Managing Director in the first year consisted of first getting to know the business and the processes. I always say that the first year is for getting to know each other. You look at all the processes, understand how and what the different departments do, who is responsible for what and how the team works. At the moment, I'm still very much in the operational business and get to see a lot here.

My goal is to understand the fundamental processes of the entire business. In the last few months, it has become more and more apparent that I will concentrate on the further development of Frauscher UK. I am full of energy and look forward to new topics. These include the development of new business areas and the focus on digitalisation in order to be able to exploit new potential in the future. It is also crucial in which direction we further develop our team so that we are ready for the future. There are many topics that I would like to tackle in the next few years.

Before that, you worked for almost 7 years at the location in Austria as Manager Process Management, among other things - and then took up the position of Production Director at the location in India. Certainly not an easy decision to go abroad for a longer period of time. How did it come about?

I would say that it was once again a coincidence to be in the right place and just looking for a new challenge. When Frauscher India became an issue for me, it was not clear from the start that I should take over the production. At first, I flew back and forth every 2-3 weeks for half a year. At that time I was still Process Manager with a team of 3 people in Austria.

The topic of Indian production was initially a side project. Honestly, if the Austrian management had asked me at that time to go to India and take over production - I would not have been ready and probably would not have dared to do it. However, after my six-month support role and getting to know the Indian site for the first time, I saw the potential in production and was sure I could make a difference. Consequently, when I was asked to take up the position in February 2017, I said yes straight away. 3 weeks later, I was already on the plane to India with a one-year contract - the India adventure could begin. It was one of my best decisions to accept this task and challenge. In the end, a one-year contract turned into 2.5 years.

To what extent did the time in India shape you?

The time in India had such an impact on me because I realised that there is so much more to learn and experience in the world. Today, I am very happy that I got this chance and that I had the courage to take on the adventure of India. I was able to get to know and understand a completely different country with different cultures.

For the first time, I had the opportunity to lead such a large team and to learn how other cultures function in teams. The time in India has shaped me to such a degree as I have developed professionally and personally to manage new challenges.

Have you already achieved everything you set out to do professionally? What goals do you still have?

I think that I can't and don't want to answer this question so simply, because it's more about the way there and not just the goal itself. If I had already achieved all my goals today, what challenges could I still tackle in the next 30 years? I don't just identify with the fact that I currently hold the post of Managing Director UK. It is much more important what I can still learn in this position - and once again in another country. For me, it is important that the content of the work fulfils me. For me, this includes leading and developing a team and the business areas as well as managing the company. I find it totally exciting to always try out new topics and find ways to solve challenges.

Christiane Stammler is Online Marketing Manager at Frauscher. After studying economics with a specialization in marketing, she started at Frauscher in 2017. Together with her team, Christiane takes care of the online activities at Frauscher to...
More about the author
Share now!
Next Article
Similar Articles

Launching into the new world of Frauscher and Sensonic! We are on track – are you?

A touch of start-up: How OKR makes our global company more agile

Read more
All articles
Sign up and stay up to date

Subscribe for more information and our latest news on products, promotions and events.